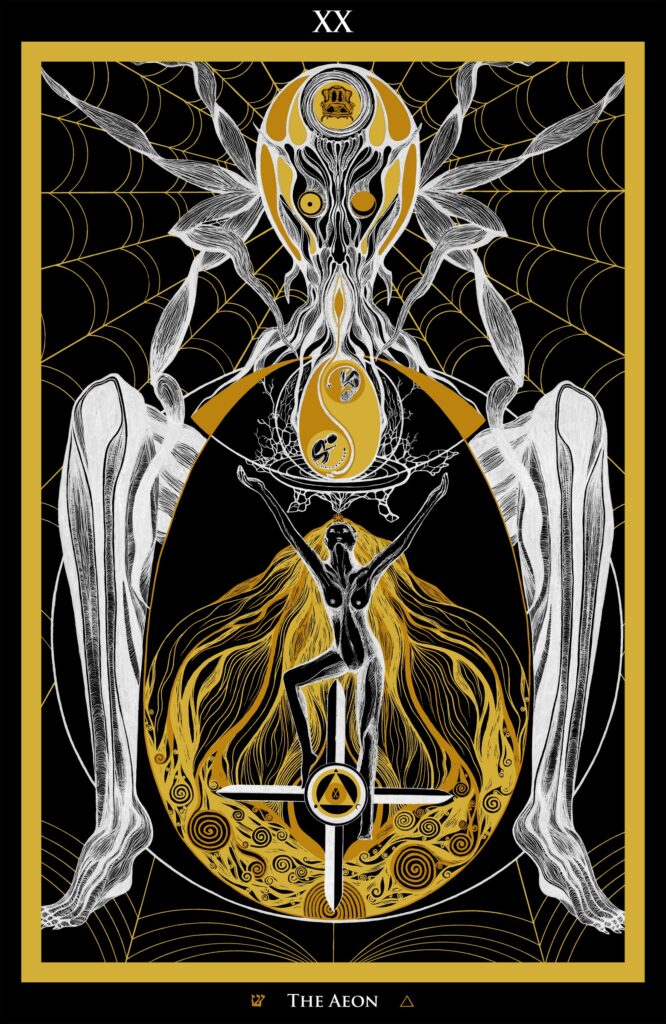 archetypes
The phoenix, the dual child (Horus and his twin brother), the messiah

This card is about the ending of a cycle and the beginning of a new one. The great spider which herds the egg is a symbol for different things. Whenever the next cycle or era begins it seems like the beginning of something entirely new and exciting. It is often forgotten that every new step we take is just one in the sum of steps on the path. So the imminence of the spider symbolizes the shadow of “the old”, one can never shake off by pretending to be someone entirely new. Responsibility for the steps we have taken can never be erased.

Our Aeon kind of has this problem. The cultural concept of the “old or past enemy” holds our whole society captive (like a spider) and clouds the real problems with veils of rays.
On a metaphysical scale the beginning of a new aeon is imminent. It’s the Age of Aquarius, the MA-ION, the aeon of Horus/Seth, the aeon of Ma-at, the silent aeon or whatever the shifting of the clockwork is called. This new period has already begun, but it is not so great and new like it seems on first sight. The Kali-Yuga is still present (and will be for a long time), even if within a much smaller scale a new “Malkuth” cycle has started.

This Age of Aquarius is the smallest gear-wheel in a much bigger clockwork. To take interest into the greater cycles can help understand one’s own circles and observe them in a new perspective.
In a gnostic light the border of the egg represents the limitation of the archons and their numbers. Every known hierarchy has its borders which one can pass over – just to find oneself within the next lowest point of a bigger net (compare the teaching of “Kether = Malkuth in a higher octave”).
Every new beginning is like a cross-way with a positive/negative possibility. The small egg symbolizes the Horus/Seth aspect of decisions which one must determine when entering a new era. Since no one can know the new laws of the path or the environment one got into, the decisions at issue can not be made based on logic or common sense. It is a subliminal choice based on the steps we have taken so far.

Like when starting a new job or project, walking into unknown woods, moving to a foreign country, entering a new relationship et cetera, only gut-feeling can guide us.
At crossroads, this undefinable feeling is responsible for far-reaching decisions in our life’s.
The young woman, welcoming the new era is a symbol for the infantile sensations we expect from new ideas. She also symbolizes the rejuvenating daughter replacing the mother on her throne – an old idea in a new dress. Also observe the small egg, which crushes the big one.
Upside-down-decisions as mentioned above carry the possibility of greatness inside. Convulsive changes of direction provide opportunities for an unexpected future, beyond the limitations of greater cycles. Only these rare moments relieve us from outside controlled structures and are the beginning of something real – free will and an actual choice.
So instead of dressing the past into new pretty masks, the challenge of this card is to find a new beginning beyond logic or imprinted ideas – just out of one’s guts.

“The Age of Aquarius” and the term of “radiation” are symbolically connected though the symbol of the double wave and the correlating element of air which is both a fluid and an invisible force. Also symbolically related are all kind of wireless waves, like for example the lately established 5G net. Since this aeon of radiation has started on different levels, there seems to be only one way forward (symbolized by the cross the girl proudly and victorious stands onto).

However to follow the current tide is not the only possibility. For example: The Aeon, if pursuing the path of “XII – The Hanged Man” (upside down) can lead to a great amplitude of different ideas, which (due to the law of equilibrium) are often more powerful and effective than the “common tide”. If these almost impossible turnarounds are done by true will, one can change the future of the environment, the morphogenetic field and even the world to a better outcome.