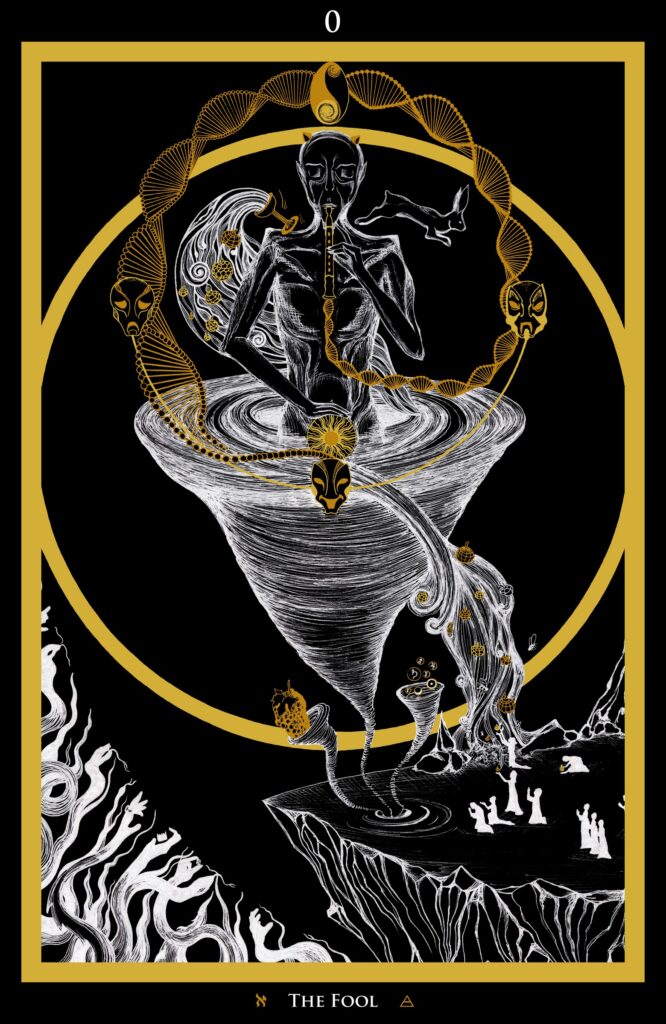 “the idea of having ideas”

On the one hand the Fool is a very positive archetype – if he is aware of his actions. He is a symbol of the forces of creation and creativity. On the other hand this archetype can represent a very tactless being whose actions are imprudent and who sticks to nothing. I also tried to depict the many fools below who represent a third side of this archetype.
„The fool“ ultimately represents the beginning of the physical universe, even before matter and antimatter. On a cosmic scale this card communicates the idea of having ideas.
Above/Before the great architect (who dreamt the first core-code), the archons, the planets and the elements there exists a completely different story and form of being. I wanted to show that it is not necessary to follow the fool who created this universe or pray to the fruits it bears. The initiator of everything did it for other reasons than worship.

He is the ultimate imaginative beginning in every dimension or cycle, even before duality. All the other cards are symbols of existing archetypes which came into existence almost simultaneously. But the fool is the idea of the translation from „not being“ into being – not duality (this idea came later).

While the entity above is the impulsive generator in the symphony in the movement of creation (symbolized by the DNA double-helix which comes out of the flute), the people below just pray to the fruits of creation instead of listening to the symphony. In place of being creators themselves they worship rotten fruits and follow false idols/gods (these days in form of celebrities and influencers) who lead them into the abyss. These idols are symbolized by the smaller hurricanes which carry wine/coins/the hermetic planets (comp. the gnosis of the archons).
The real fools below represent communities likes religions, cults or orders. They band together to adore or worship a single archetype instead of doing something on their own. The “rotten fruits“ are the visible proof of the great opus (gematria, hermeticism, gnosticism) which unfortunately just poison global culture through the ages. This doesn’t mean that the fruit is initially bad, just that it comes down rotten when used for purposes of „worship, power“ or „social pyramid building“. The idea here would be to climb up the tree and get fresh fruits instead of revelling into mummified ideas of others – in other words: Experiencing the god instead of praying.
In the abyss serpents and greedy hands are already waiting for the victims of these fallacious currents. They are falling helplessly. Often the act of falling is not recognized while it happens because the outcome takes a while to manifest – the pain only is there after the landing. Let’s take the example for the whole process: You see an advertisement (one of the rotten fruits), which leads to the feeling of need. You buy this special item, pay with your credit card and one month later notice you can’t pay the bill – and the item didn’t even make you happy. The very obvious (and sometimes very hard) solution to this dilemma would be to stop following outside influences and start to question your demands and addictions. The Abyss represents the beginning of a new cycle, because seduction will manifest itself over and over again until the lesson is learned.

Back from the fools below to the creator above:  The fool is neither serious nor steady. He has an intuitive understanding of the tides and currents which manifest around him and is able to react to them very quickly. This corresponds to his airy nature and the hurricane he is on.
Also consider the magical symbols of the hurricane: The eye (the Fool) is the centre in the vortex (of creation) 0 →1. I also intended to refer to Crowley’s Hadit and the many mysteries which are connected to this term.
The symphony/DNA is evolving and passes through the different masks or aspects of creation. My goal here was to symbolize the long path from idea to the manifestation into matter. Only if done properly and accurate an idea can evolve into an opus. Many of these ideas struggle and collapse on the way, because they do not correspond to the own real true will.
The rabbit is a symbol for Osiris and emblematizes the very important indication for the old egyptian mystery that „Osiris is a dark god“.

Another positive aspect of this archetype can be that „the fool“ doesn’t think things through or prepares for a certain goal to reach. The only thing that matters is the impulse of creativity for its own sake – which is almost holy because it represents „being the one that you are“ without consequences or relations to any other thing. Of course, should someone try to catch this „holy“ moment and stretch it into a longer period this process ultimately leads to great destruction and recklessness. This is the other side of the coin, as there always is. 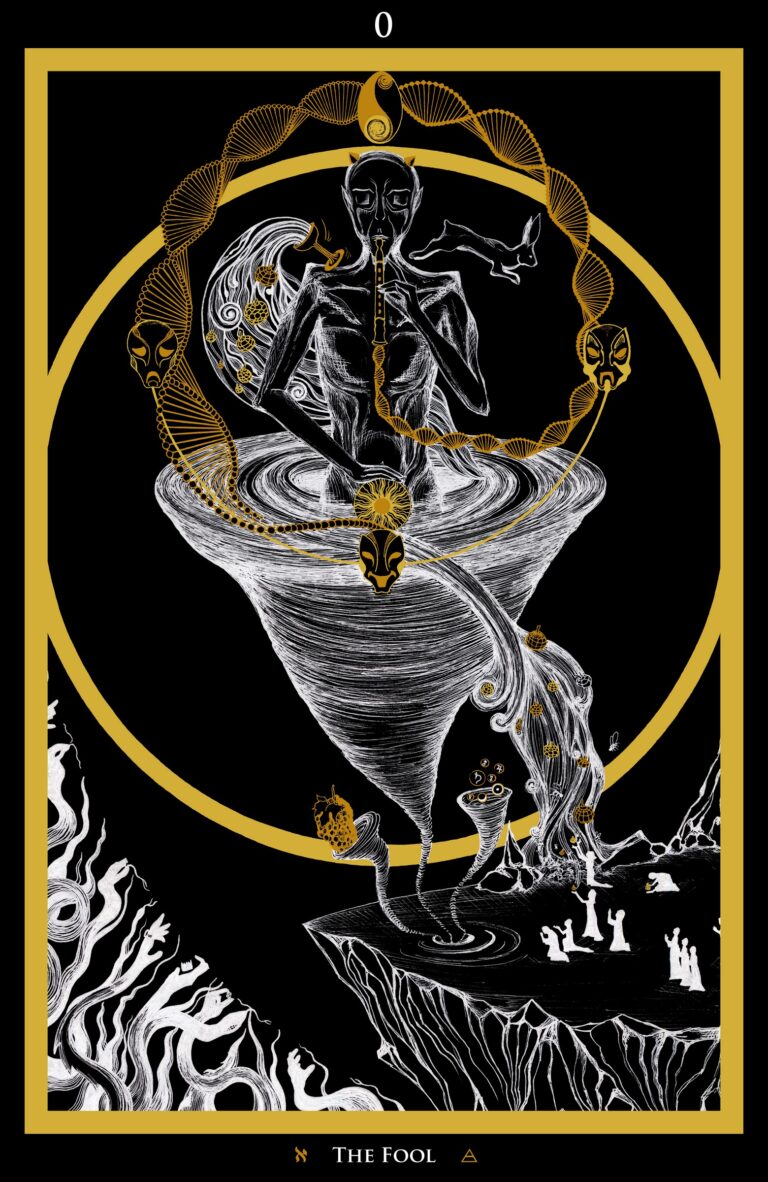