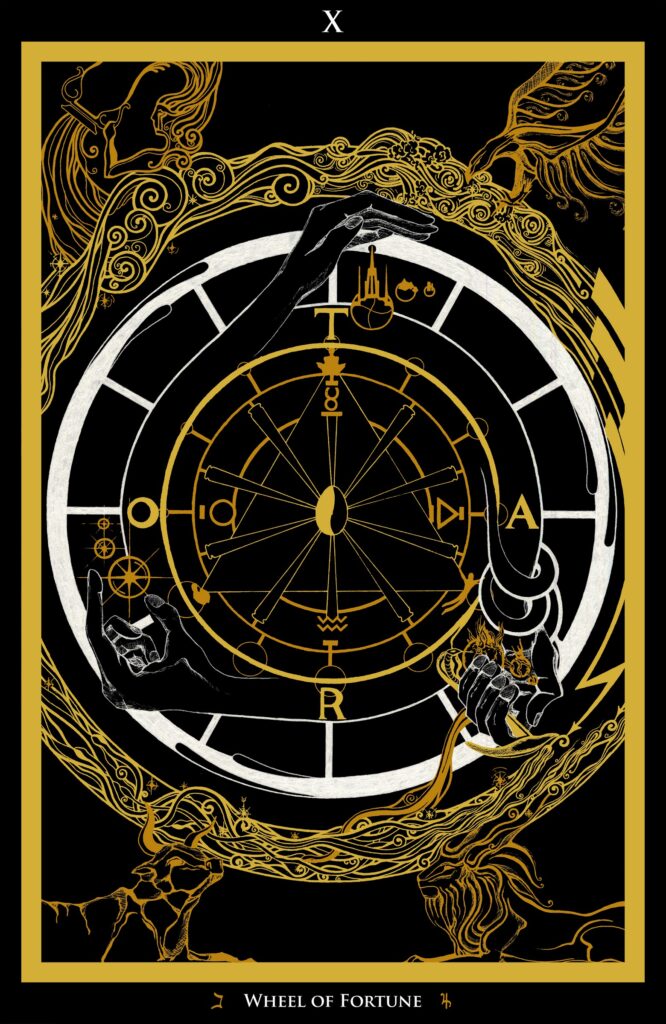 “the cycles of the multiverse and acceptance of fate”

On the wheel sit the three conditions of being –  they refer to the trinity of the creator – Brahma – (the person in its embryonic, developing state), the sustainer – Vishnu – (the person meditating) and the destroyer – Shiva  (symbolized by the falling person).  This cycle repeats itself over and over again through the constant of time. I used hands because the transition from one to another is not random or automated, but has to be initiated by a greater cycle or catalyst.

Some words on the metaphysics of this symbol:
This wheel is (much like the scheme of the Sephirot) only one symbolic gear wheel in a cosmic clockwork. In an incarnation one can only observe his wheel or cycle, but will never know all of them. Therefore the future is not predictable from our point of view, because our observation is happening from inside our wheel within our borders of time. So it is very difficult to define in which Yuga, aeon or period we are in context to the rest of the clockwork.
The Creator is represented by the spark of a nascent star. He is born from particles which derive from other destroyed compounds which are thrown together. Crowley’s  “every man and women is a star“ does mean a lot more, but also that we can only exist because of the elements within us. Sometimes, physics do sound a little like magic – we carry elements from destroyed stars in our own bodies.. Evolution or creation is only possible through destruction of different compounds. In the birth of the star every potential is already present in a passive state. It will develop in relation to it’s environment and a new unique cycle begins (the rising sun). The second state represents the sustainer (the midday sun). His protective hand is guarding a balanced and stable society, a being or the general order of things. This state is the goal of every collective that ever existed. But like all things it must perish. Environmental and economic transformations are usually the initiators of imminent change. In a cascadic reaction the once stable condition begins to decay, often accompanied by problems like the avoidance of conflicts, corruption and indolence, which leads to imbalance. The moment before the fall can be described as a state of debauchery, delights and exaggeration (Compare: XV – The Devil). This period is reflected in nature by the season of autumn.
Such a decaying society or being is predestined to fall and get destroyed, symbolized by the crushing hand. It usually needs help from outside. In a community it happens to be overtaken, or worn down by war against a stronger, more advanced party. A falling person is surprised by an accident, a disease, a dismissal, betrayal or any other sudden change in life . Often the stages of falling take time and are followed by a period of rotting (alchemical putrefaction) and rest. Only time can heal the wounds of the fall. This state is followed by a collection of the remaining resources and slow recovery, before the cycle starts again.

The wheel promises transformation but also certitude that no condition lasts forever. After all the only constant of the multiverse is change. Every component of the cycle is preserved within the wheel,It only changes appearance and form, but cannot be lost.

The card is confined by the four cherubim which represent the alchemical elements - the lion (fire), the taurus (earth), the eagle (water) and the aquarius (air). Their fluids are circulating into one another and the borders inbetween them are not defined but fluent by nature,and the seasons are a physical expression of these elements. 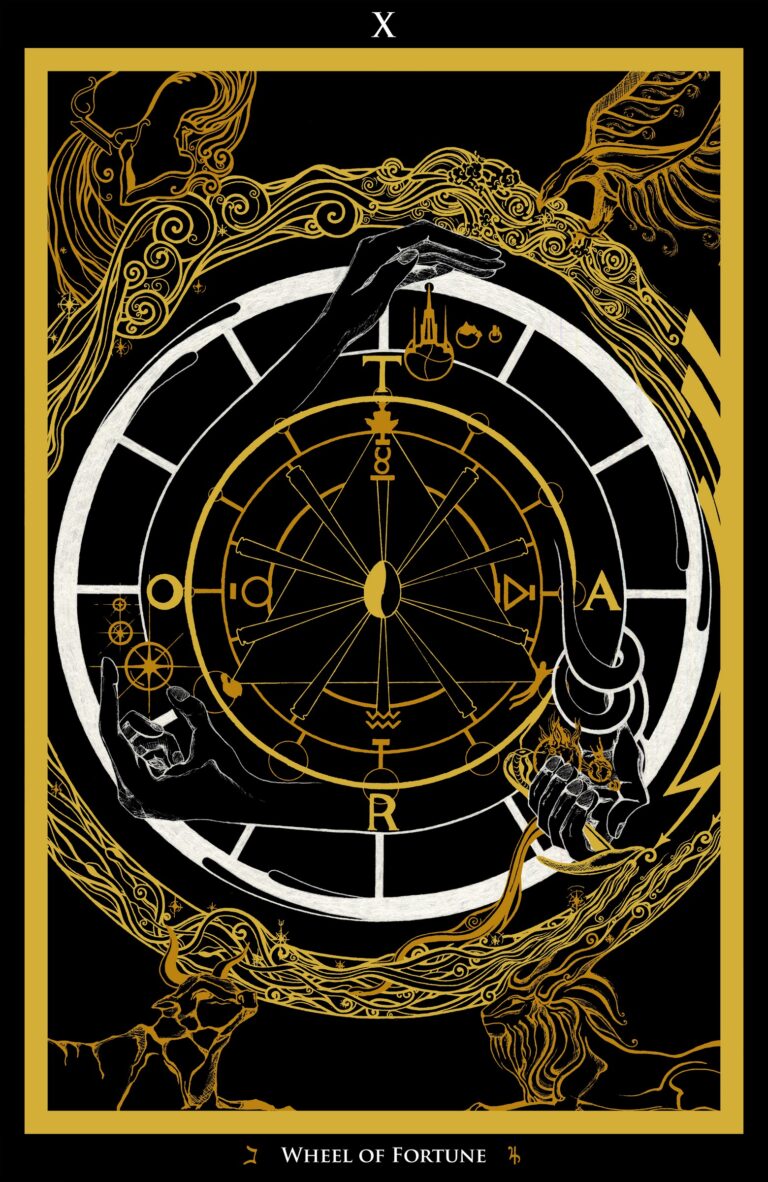