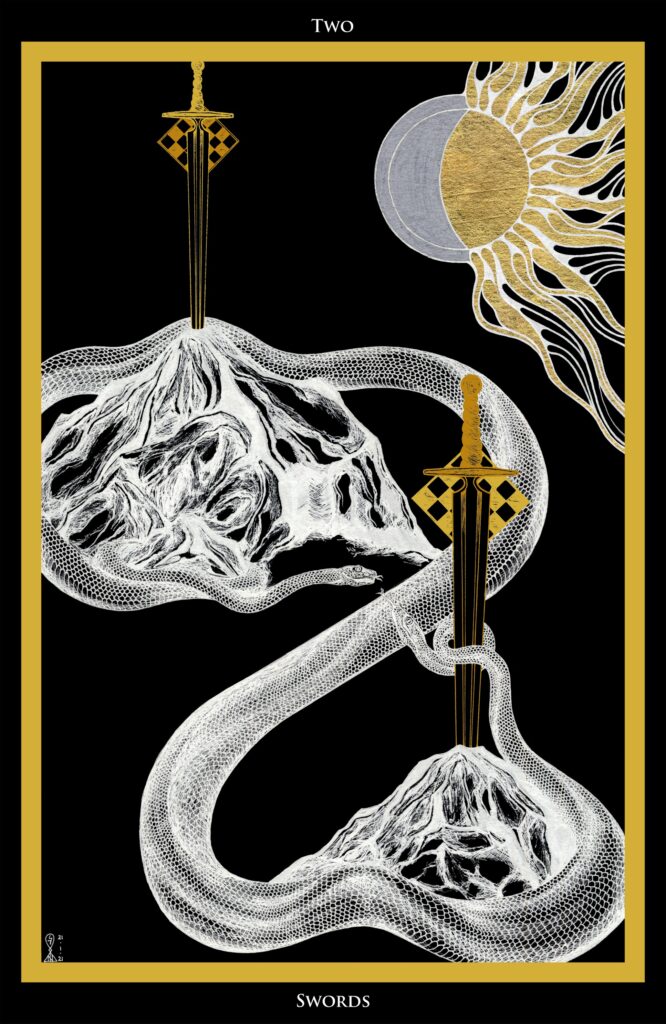 „the search for equilibrium in duality“

symbols
decision making, search for identity, the game of division and opposites

The Two of Swords Tarot card is all about diversion as well as decisions and search for identity. The swords stick in two stones which remind of the king arthus saga which is all about choices.
Often there are two paths, opportunities, decisions or any opposite principles one has to choose from. The serpents cycling the stones are guarding two principles which are basically the same but seem to be absolute opposites. The chessboards indicate duality is just a game. Most of the time it doesn’t matter which side one plays, as long as he doesn’t refuse to play at all.
Every choice and decision leads to experience which must be made either way. The two principles seem to oppose each other, but just the dual ankle and world-view makes them contradicting each other. Both, the symbol of infinity and the ouroboros are a clue to the simple fact that in every decision the opposite is already contained and fulfilled simultaneously. The multiverse seeks equilibrium so every decision has consequences on the balance of self as of the whole. No such choice is right, no choice is wrong, simply not doing anything wouldn’t be wise since that’s the only path which leads to nothing. “Nothing” in this context means a repetition of the cycle we’re in already. So choices can be delayed but not lifted from the face of the earth.
This abstract concept can best be described as an infinite “to do list”. One can push up other tasks, but not eliminate uncomfortable problems by closing the eyes on them. But yes, with every such decision the paths divide eventually. As above so below, we experience this division of unity every day – it can’t and shouldn’t be avoided. The only wrong thing to do would be “not to choose” and walk away.
Some philosophies would even regard this entanglement into repeating circles a cardinal sin. Only decisions carry one onwards and make us who we truly are. If one isn’t able to make his move, the environment decides for him/her. Only then we become a passive playing ball without free will – a pawn instead of a king.
No one wants to be that, but nevertheless pawns are the most common figures in this chess of life. The luciferian principle would suggest that choice is meant as a gift and not a burden. Every problem to be resolved gives the opportunity to experience and transcend the dual concept as a whole. The search for equilibrium is an adventure into a series of difficult decisions which has to be risked to gain an understanding of a wider spectrum of the whole.