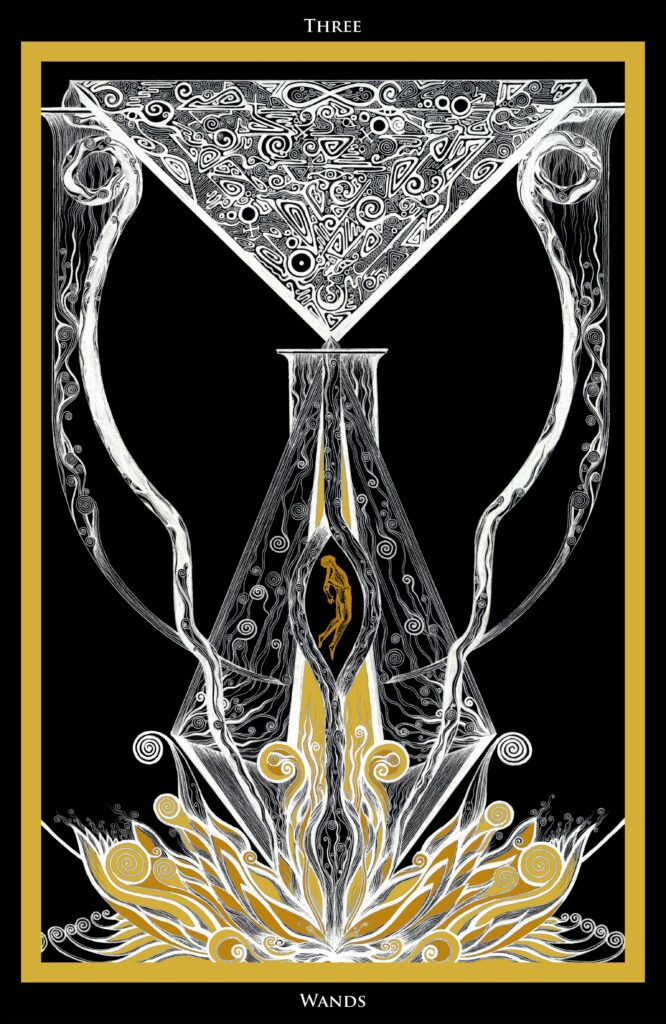 “the foundation of expansion”

This card promises growth and shows a person who is full of potential.
The lotus in the lower area gives birth to the three wands which are represented as three pillars. They are corresponding to the pillars of the kabbalah. Every project needs a beginning and a foundation which it is build on. The three pillars are the bearing base of every such endeavor.
The baldachin above is the creative, but already bound force which leads to the next step eventually. It is a reference to binah and the expansion of this idea which is by it’s formula of triangulation enclosed in every project one can initiate.
This best can be compared to a sketch, an artist has made or a draft an architect has drawn. A concrete but still rough shape of what is to come. Compare to the symbolism of the rough ashlar/stone.
If one looks closer, the planetary symbols are contained within the seemingly chaotic structure of the triangle. In a symbolic context this means that every idea is already included, but not embodied however. It has a form, but hasn’t come to life yet. The person in the middle pillar/wand is elevated by this process, guarded and herded like an egg. This means that the idea is still protected from consequences at this point of the design.
A lot of spirals are on this card, which does not only mean that a considerable amount of creative and floating energy is involved, but it is also indicated that many ways from this point on lead into paths without an end. Not every draft turns into a painting and not every idea turns out to be an actual plan.
That not all permutations succeed is part of the grand design, quite alright and part of the journey. However, one should observe himself at this point. Questions like – “do I usually follow my plans?”, and “do I walk my paths without major distractions?” can be helpful in solving issues with lack of success. Usually the outside world is not the reason for failure but the inner continuity and trust in the “future self” is. Also a draft should be planned from here on. Creative chaos is only good until a certain point in an endeavor. Structure, planning and calculating must also be involved in this process at the right time.
Do not regret those nowhere leading spirals and ideas which didn’t make it. If looking back, one cannot look forward at the same time. The path that’s ahead is full of opportunity and prospect, where the old ideas are already dead and rotting. It is advised to trust the inner feeling and with a bit of luck, there’s a glimpse of foresight of what is to come already inside, which only has to be realized to manifest itself.