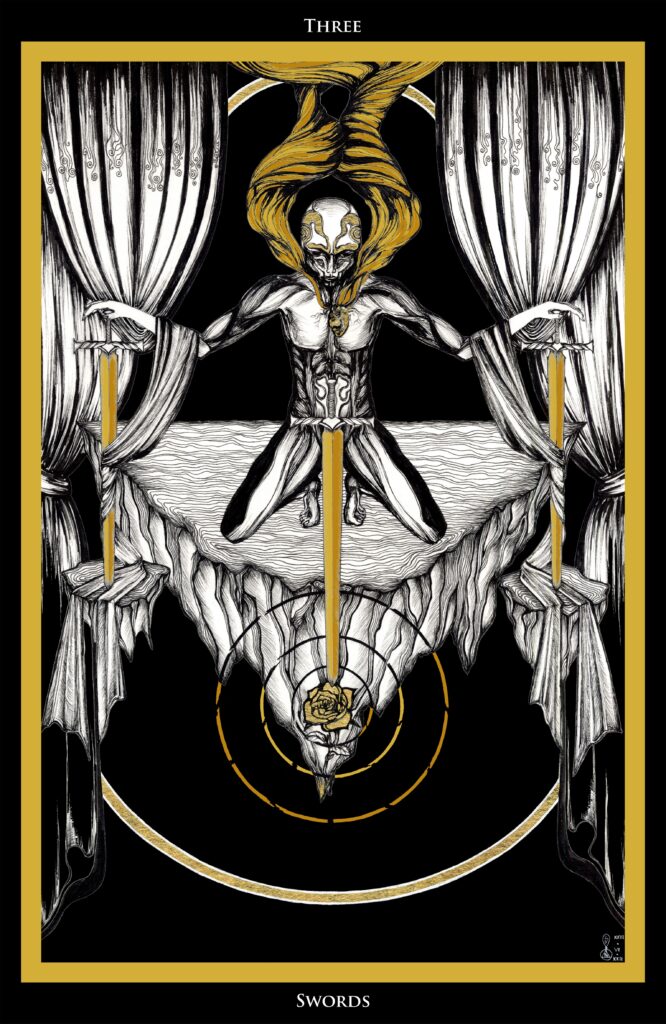 “violation of the sacred veil”

This card shows three swords, piercing sacred symbols.
The rose in the middle is a symbol for the feminine principle, silence and hidden mysteries.
This card can therefor be about breaking a vow of silence, or revealing a secret which should better be kept. It can also regard a relationship which is about to break or get damaged in a serious manner. Feelings may be hurt or even violated.
The rose has a broken halo consisting of three, seven and twelve compartments,that are being destroyed. In a hermetic context, this numbers reference to the rosicrucian cross and therefor to the breaching or disrespecting of the mysteries.
The veil which is being pierced by the two swords to the left and right, symbolizes the natural division of all things. This veil is supposed to open at times naturally, offering secrets and enlightening to those who are willing to offer themselves. The protagonist on the card was very well able to achieve this state but won’t let go. But like all matters must submit to cycles and the tides this veil has to close again. Instead of letting the veil shut itself naturally, he pierces the veil with his swords and won’t let go. This violent act hurts both him and the veil itself.
It rips a hole into reality where everyone involved gets hurt and damaged, or even traumatized. He is holding back on something that is already lost.
This violator is crucified by this act and bound by his action, unable to move freely anymore. His base is breaking apart and he is about to fall without recognizing it yet. The feeling of control may still deceive him at this point because he is feeling stable still, but he is not. If he won’t let go and face the consequences of his doings, the next step will eventually lead to the card and archetype of “XVI The Tower”. A revenging force is already forming, due to his malefaction. The storm in his heart is a precursor to the thunder which awaits him.
For someone outside this circle of actions the card can be a warning that betrayal is imminent and a real danger.

If the damage is done, the harm committed cannot be undone. But it is necessary to take responsibility as a next step. Every wound can be healed through understanding and forgiveness and within a relationship love can transcend everything. This may take time though, so no need to rush on to the next chapter in life just yet. Binah demands to look back for once, not yet forward, even if this is painful. Recognize what has been done in it’s full capacity and start an effort to heal the wound that has been inflicted.