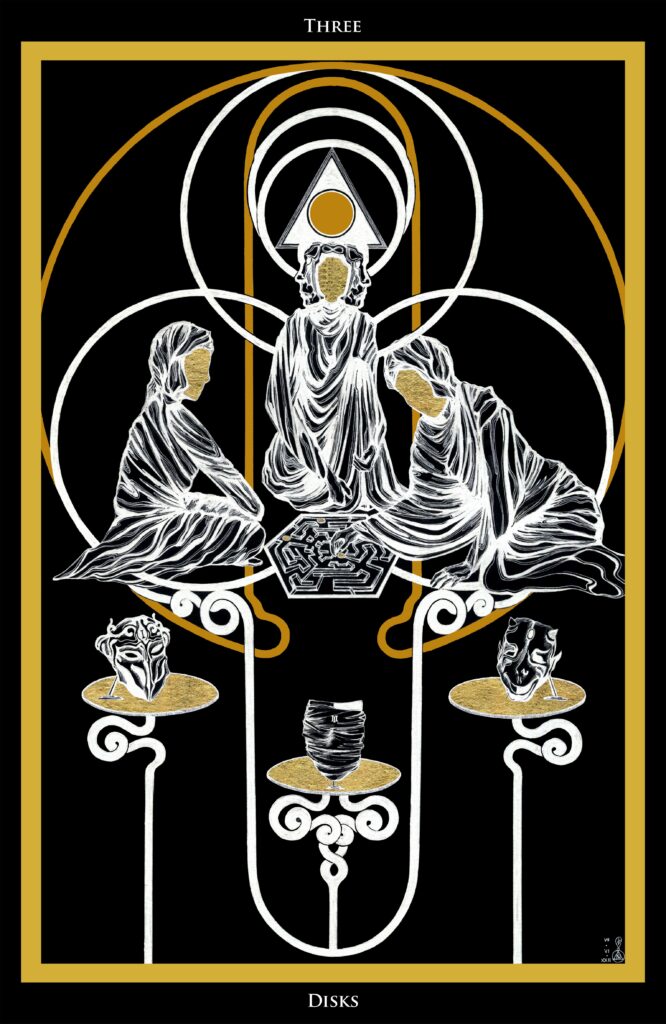 This card shows three people, sitting together and playing a board game.
The three forces involved are faceless to the observer, but unmasked when dealing with each other.
From outside this group may even appear to be mysterious, secretive and even suspicious. That’s because, outside forces must be excluded in this delicate process to guard the board game from being interrupted or the task from being deranged.
The board game represents the world, the personal life or path, an important project or some kind of serious work.
It’s not just a game but quite a serious effort.
The person in the middle is faceless too, but wears a Janus mask, watching both persons next to her. This person is the connector between two equal forces. Looking back into the past and the future, left and right at the same time, it represents a state of mind and consciousness, transcending duality, space and time. Only when coming together in this constellation, creation can be truly possible. It marks a time of great inspiration, forming fruitful relationships and bonding in a deep and lasting way.
How important this process is, can be explained with the help of the tree of life.
Three masks are laying in front according to their attributed paths on the kabbalah.
Left we can observe the card of I – The Magus (connection Kether <-> Binah), right O – The Fool (connection Kether <-> Chokmah) and in the middle III – The Empress (connection Chokmah <-> Binah). Together they form the highest triad of creation. In Assiah they appear in physical form, sitting together, still playing out the worlds game. It is a reminder, that even in Malkuth the major forces are still involved, especially in forming relationships and bringing the right people together. They usually mark these red dots in life that will change the self and/or the group involved for the rest of the path and life. Often this card is drawn when facing an inevitable point in being, which must happen the way it is supposed to be. Getting to know new people and facing grand tasks can be scary and working together in such a way is often even more unfamiliar. But while in the beginning they seem to be faceless, like depicted on the card, it is soon recognized that the own mask must fall to see them as they really are.

When this process doesn’t involve others, but happens inside, it marks a period of important inwardly steps towards creating the personal great opus. Whenever these three core forces match together, an excellent outcome can be expected. The Fool, representing creative energy, but also the necessary sarcastic self-criticism, The Magus representing the inner will to action and the Empress, representing the divine nature and the gate towards a goal, form a triad of divine (inner) force which will manifest itself in the success of creation.
This is usually a very positive card. It is just advised to not get self-righteous in this process and to face those node points in a slow and steady way. There’s nothing to rush here. Coming together takes time and mutual effort. The mask should be taken off in a careful and deliberate manner to adapt to the group or the newly created self naturally and gradually.