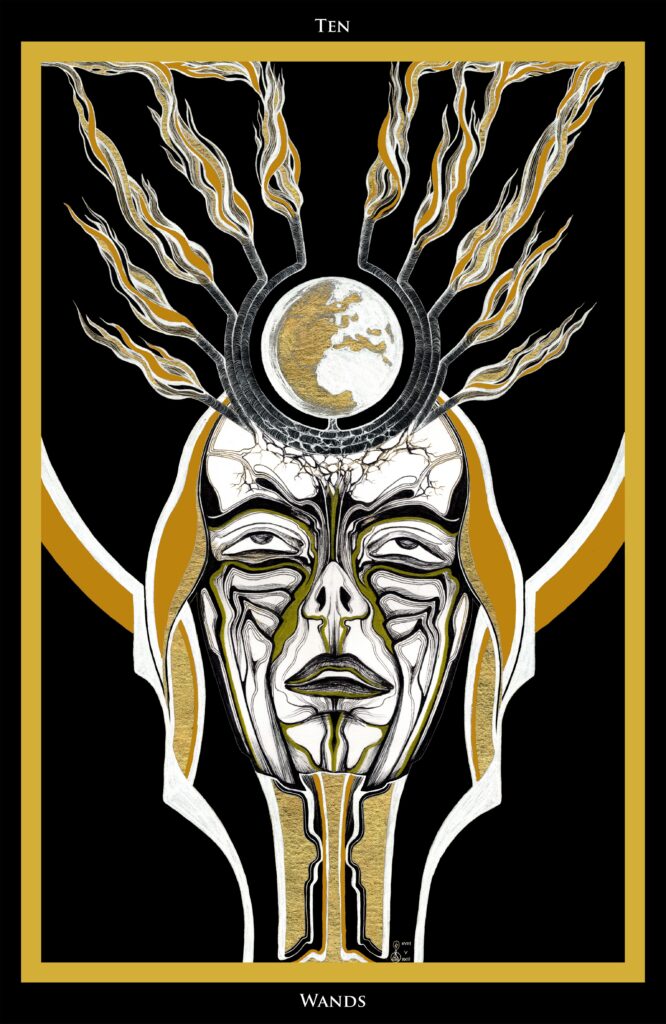 This card appears to be quite positive at first sight but by looking closer one can recognize that the forehead of the protagonist on this card is breaking from the weight of his crown. The person on this card is competent and of great constitution, often both mentally as physically. That’s why he tasks himself with various duties.
At some point, he is burdened by an overhelming responsibility, which can also be of a spiritual nature. Often the person only ment to help others or thought he knew himself so well, that he could cope with a lot of complex assignments, but it has become too much.
He/she still appears to be strong, but the look shows, that the load can’t be borne any longer.
The problem with too much weight is usually, that the heavyness of one’s tasks and liabilities won’t go away all of a sudden.
Also, it is not a training, where one gets stronger, but rather kind of a pressure, which makes one weaker, the longer it lasts. This burden will eventually be too much. hard work and a “doing it all” attitude will lead to grand physical success, but the mind, the body and the spiritual development will suffer from too much advancement in a short time.
Usually the cause of this dilemma is too much ambition and overconfidence.
It is advised to relax if possible, if not, sharing the burden of the responsibility with others can help. If it is not avoidable for a certain time to escape this situation, stamina and endurance are absolutely necessary characteristics on this path. But be aware that the weight can crush down at any moment, so finding a resolution to this overweight is advised.
There is no shame in recognizing one’s own borders and limits. It is a core issue of getting oneself to know better.
A symbolic archetype can be the myth of Atlas, bearing the weight of the firmament on his shoulders.
Physical symptoms can involve anxiety, palpation of the heart, pyrosis, headache and neck pain. Remember, this can’t be solved by quickly swallowing a pill – a burnout is a real danger here. Only by reflecting honestly on the situation and the self the situation will change to the better, which isn’t an easy task for this (over-)confident and often brilliant archetype.