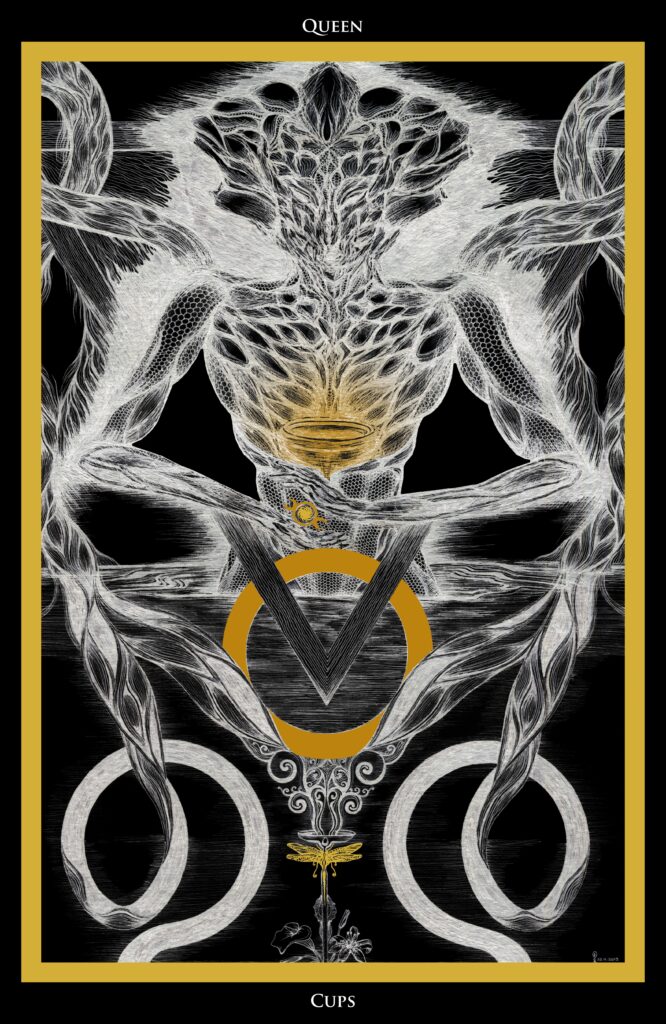 „the great mother of the depths“

symbols
the inner abyss, feeling and intuition but also suppressed sadness and suffering

As some of you know the cups cards are connected to Water, Briah, feeling and inuition.
The queen of cards as such represents the great mother of the deep sea which is strongly connected to the major arcana of „III – The Empress „, „XIII – Death“ and „XVIII – The Moon„. I’ve studied the symbolism, compared different Tarot cards and interpretations and had absolutely no idea what to draw – nothing seemed to fit intellectually. But I felt a strong connection, like a door or gate and I entered. I don’t often fall into trance spontaneously, but here I did. I’ve drawn the queens face and her tentacles very fast, in meditation and was really suprised with the work I had done. The transformation into a Tarot card was easy by then.
The queen represents a creature of the sea. The sea itself is a symbol for the dephts of the soul and our subconsciousness. It’s blackness and deep waters hide suppressed feelings, buried talents and other tendencies we are afraid to look into.
When you compare the collective subconsciousness to the physical sea (Binah in Assiah), which is unfortunately contaminated, radioactive, full of waste and dying, you could maybe grasp humanities hidden tendencies and also the comprehensible mood of this emanation of the great mother.
Her face is angry, sucking in all the grind and influences we are not able to face on a seizable level. Like our subconsciousness which absorbs all impressions she is the ultimate passive principle which receives everything but cannot express herself consciously or in an active way. As such she suffers as much as she is unknown and therefor terrifying.
It is said that during initiation one must descend into the „depths of the well of the mothers“. Let me translate without ripping the veil. One has to face the inner fears and dark parts of oneself (=the own subconsciouness) and deal which the topics that are hidden within. Suffering, letting go, loosing the mind and nearly drowning is usually required to finally learn how to swim. The three whirls in the lower corner of the picture represent this process. Look into the connection with „XVIII – The Moon“ and the association with somnambulism, ritual trance, intoxication and intuition.
In the lowest corner the lilies and the flesh eating plant as well as the dragonfly symbolize the dangers, the brutality as well as the disintegrating forces involved (=“XIII – Death“ and putrefaction).
Also these lower symbols represent beauty, tenderness and grace and the solution to the process. The queen is protecting the holy grail which reprents the yet unreachable „true will“ or purpose in life – (alchemically: fire in water). Only after discovering and exploring the dephts and getting to know the hidden self one can truely find the buried but necessary talents to take the next step. This card represents the great chance to „learn to swim“ which can never be unlearned fortunately.