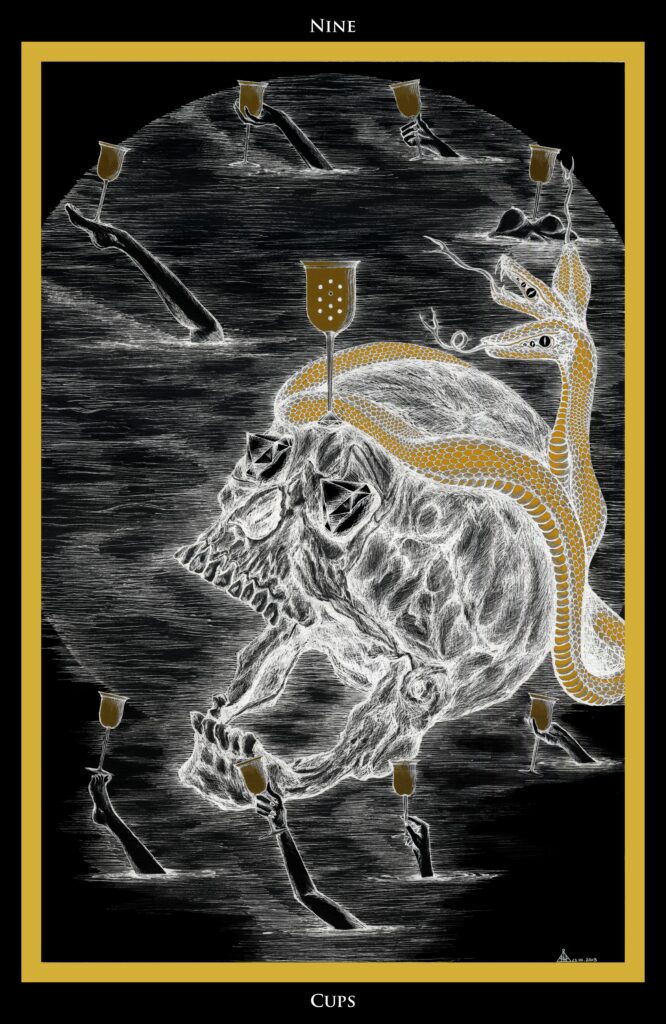 This card is depicted very unusually. I was guided by an inner vision of how it must look like and got carried away by this intuition. That happens very often with the cup cards, because their main aspect should be called „guidance by intuition“ So I needed to interpret this card intellectually only after it was drawn. It is obviously kind of an orgy or round dance, celebrating death, life, beauty and wealth – like a sabbath. The pisces correlation is expressed through the water and the tempting women which lure the observer into the deep.
The main lesson to learn with this card is that „there is no physical satisfaction“ – it can never be. The moment of fulfillment is already the path of falling down again. So the ultimate goal of perfection or reaching the top of the mountain is the beginning of the descent. Life is a dance, celebrating not the final satisfaction but death as the ultimate and imminent goal.
The only one on top of this reality (= the skull) and not drowning, is the three-headed serpent which is connected to the main arcana of „The Wheel of Fortune“ and the three states of being – creator, sustainer or destroyer. It all sounds a bit vague but if one knows the symbols, one should gasp what I mean. Also consider it as a critical statement to Crowleys „Liber al Vel Legis“ and the „I am the Snake that giveth Knowledge & Delight“ passage.