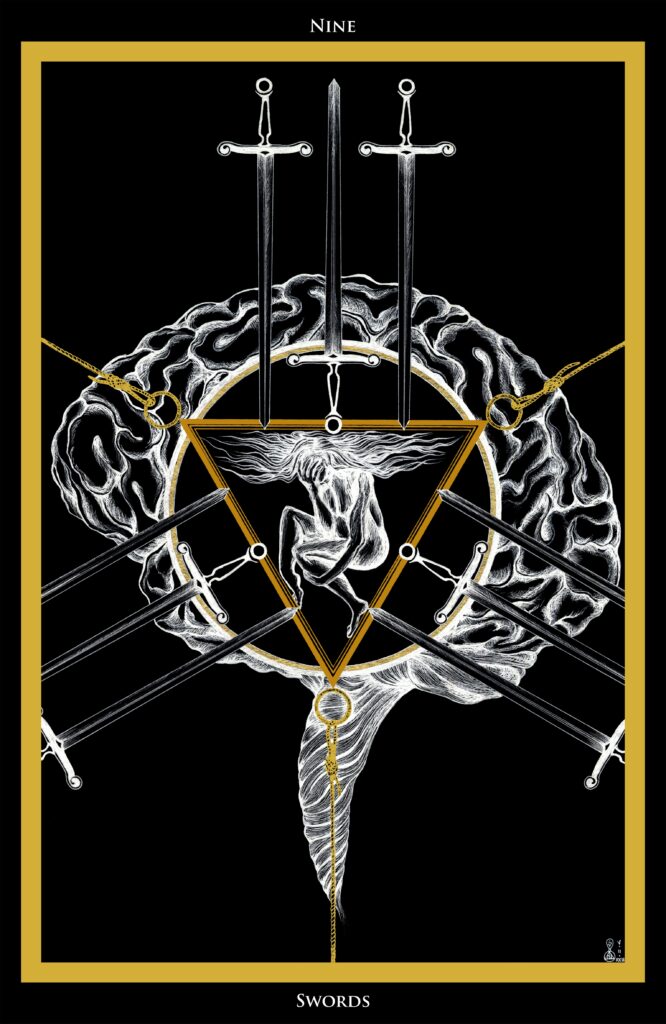 “the prison of the own mind”

This card can’t be more clear about what it’s about. If fear and terror last for a period of time which exceed the capability of coping with those situations, a trauma develops. Post traumatic stress and anxiety is the result of these often life changing situations. Even if the source of the malady is long gone, the self is not able to break free of it. A person in this situation can’t come out of hiding, is no self-reliant and often can’t make decisions.
To be trapped means the lack of ability to move around and as a conclusion the total absence of freedom without the structure of (inner) order.
Fear is the ruler of this persons mind and a strict and ruthless prison guard.
This prison has become the only comfort zone. It is often not realized that there is almost no stress relief possible any more.
The own thoughts have become the enemy with whom one is jailed with.
While being held prisoner by the mind, it is frequently experienced to be trapped by outside forces which are represented by the six swords. It is without realizing that these currents are most welcome excuses to not break free. The uncomfortable fact is, that three of these swords have turned their handle inwards, ready to be grappled without much effort. It is easier to be the active liberator of the own self then it is generally thought. The fear of falling into the unknown and of loosing the little control the mind has left usually keeps one in this uncomfortable state which is perceived as the only possible retreat.
In a spiritual context in many systems of philosophy it is said, that even matter is only made up by the mind and the greatest illusion of all. To break free of matter is analogue to leaving the prison of the mind.
There are outside solutions which may be necessary, but they have to be pursued in an active way.
Asking the right people for help, learning about mechanisms to ease both mind and body and making small steps into being more active can help to widen the ability to move again. This is a slow process and may take a longer period of time. There may be setbacks and relapses, but in the end the lesson learned and the path to the traumata being processed will lead to an evolution within, which can’t be compared to any other process. It is the ultimate goal of the alchemist to transmute the elements into this higher state of being.
It is suggested to make a first step by starting to only bother about those issues which can be influenced directly. The thoughts should loose their complexity and variety and become more focused with time. The fear of falling will eventually develop into the trust of being able to naturally jump down into a new phase of life.