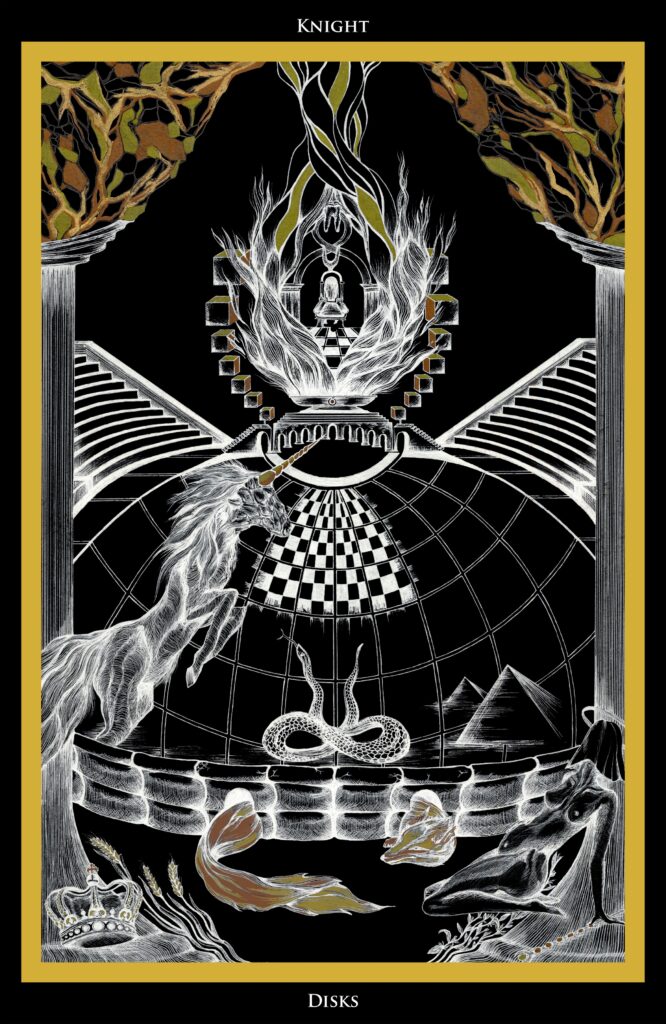 symbols
pursuit of possession in connection with exploitation and harvest, constancy, rationality

We can observe and underground cave, full of minerals, cristals and riches. In the middle there is an arena in which a serpent and the unicorn are fighting. The arena, containing a chessboard is obviously a symbol for earth itself.

The unicorn represents the fertilizing sword. It is a reference to the liberator or the alchemical „spiritus mercurius“ in context to the woman who eventually catches and bridles the unicorn. Depending on the myth or folklore this woman can be a virgin or a harlot. In Christianity she is represented by both – the Mother Mary and Mary Magdalena. She is also the suffering Sophia in a gnostic light. In malkuth she is the bride or in more casual words „mother earth“, exploited but pregnant with the celestial son.
Casually she is holding a sceptre as a sign that she is not helpless but still carries veiled power.
Above the chessboard we can see an empty throne. No one of relevance is watching the fight from the tribune which happens below. An empty throne can be found in countless pieces of art over the centuries. This always means that the creator/king/emperor/architect/gardener is already gone and can’t harvest anything any more from above. The act of harvesting the fruits (of the creation) is fulfilled by his ruling children (the archonts).
The firefox in the lower area of the card hides while the unicorn and the serpent are fighting over the fate of the world. The fox archetype usually is wise but a scoundrel in his nature. He can be connected to the archetype of „The Fool“ in Assiah. He smiles like he knows a secret. In a negative aspect he also can be correlated to a charismatic but false messiah.
The messiah and the king are two contrary archetypes. The fool in assiah is the secret king which came down from his empty throne to hide.
Study this very important cosmic symbol and compare to the myth of Zeus or most other god-kings. They get bored and travel down to earth to pursuit their adventures in disguise. Usually this disguise can be a beast, often a taurus or some other animal. These adventures are usually accompanied by an abusive behaviour. Mostly an innocent woman or virgin suffers from it. Observe the virgin which is sitting pregnant next to him in ths context. Although he can’t harvest from his throne he participates in consuming the fruits of creation in some physical way. The crown on his left, and the sceptre on his right indicate his hidden self and power which can not be used in an active way. Decoupled from accountability he knows no rules, unconsciously aware of his remaining omnipotence.
Both, the hidden king and the suffering mother can only be liberated through their son (the unicorn) which much fight it’s own dark side (the serpent). This refers to the messiah dilemma who is only able to liberate if he resists the temptations of power and omnipotence, inherited from his tumbled father. In occultism you can compare this key mystery to both, the „Horus-twin“ or the „Lucifer-Christus“ analogies. Also the answer of „the ruler“ or Jaldabaoth can be experienced with the help of these keys. 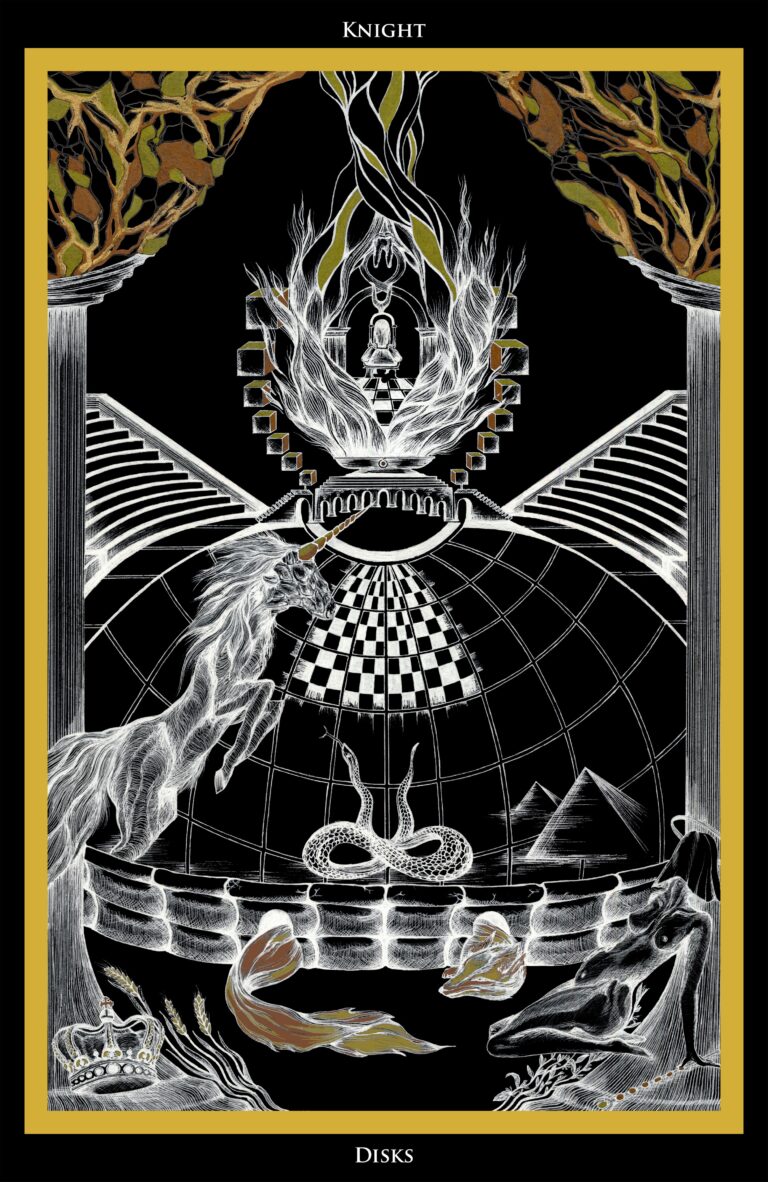