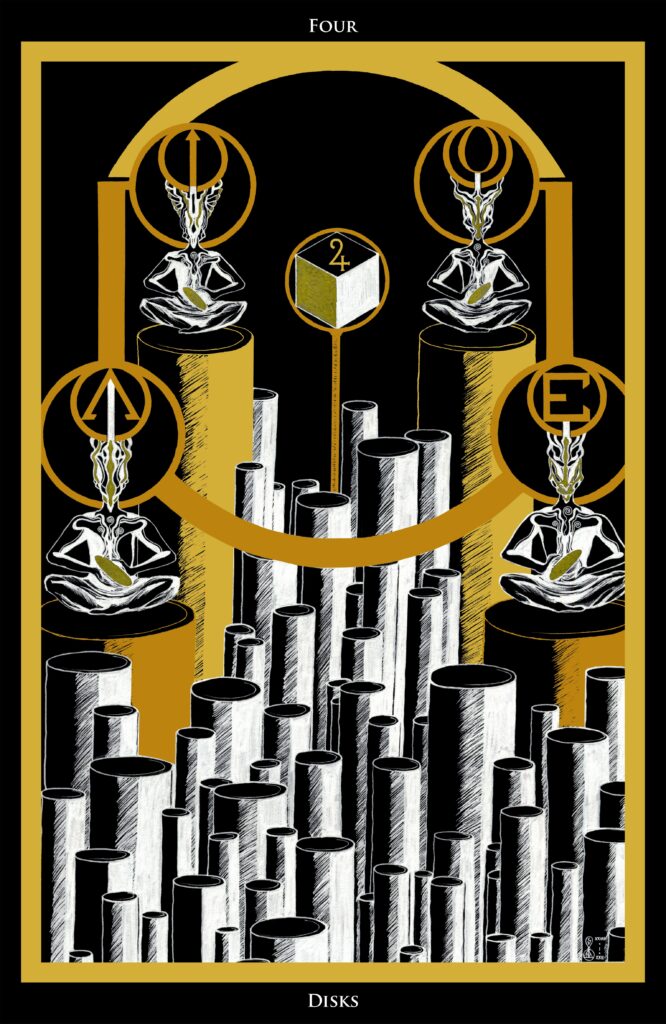 This card represents a stable and balanced sovereignty and control over something or someone. Most of the time this “someone” is the own self. A firm foundation is needed to achieve this state. Coming to peace with the surroundings (the outer world) and the self (the inner world) is often the same thing. Sitting down and achieving an overview about the situation can help to observe things from a different angle. The four symbolical rulers sit quietly and are holding disks that represent the physical features, which are handled well. Witness the fact, that they are based on pillars and are not down to earth. To rule over a situation means to stop “doing and acting” for a while and climb up the ladder to get an overview about a situation. Activity can never happen at the same time as observing.
To be in this position does not mean to become “one out of many” or raise above others, but quite differently – to take a step into the background and simply detach oneself from the current situation. It is not one who sits on a pillar, but four. These four are one in function and being but have to be recognized separately. They are crowned with four vowels “A E I O” and connected by the fifth “U”.
These vowels A E I O represent the alchemical elements as well as the elements, which form a word into being through pronunciation. In a symbolical context that means that even if the materials (consonants/the outer world) are already given, the architect, artist or engineer forms them together to an outcome. This process of ability is strictly based on ones own lack or plenty of talents (vowels/the inner state of being) which must be balanced equally to lead to an outcome.
Balanced together they awake in the self to represent the father/ the king and the ruler. Like in physical life it is necessary and healthy to invoke this state only for the need of the situation which is involved. To step down and dissolve this rulership into, again being a equivalent part of the society is as important as stepping up in instances of need. It can be observed that the four ruler start to smile, enjoying their masks and the power as well as the security, which comes along with ruling a situation, the self or a group of people. This is the immediate danger which presents itself with this card. In a cabbalistic context it is known that Chesed (Jupiter) is balanced and directly leads to Geburah (Mars) with all of it’s power, severity and dark aspects. To step only up to Chesed for the good of the situation and to step down after it is resolved, usually can avoid being tempted by power for too long.
Beware of the incidents, when the four rulers become one for a longer period of time and strengthen their position through support of others. In this case they will get to know the archetype of IV The Emperor and eventually invocate his inevitable fall.