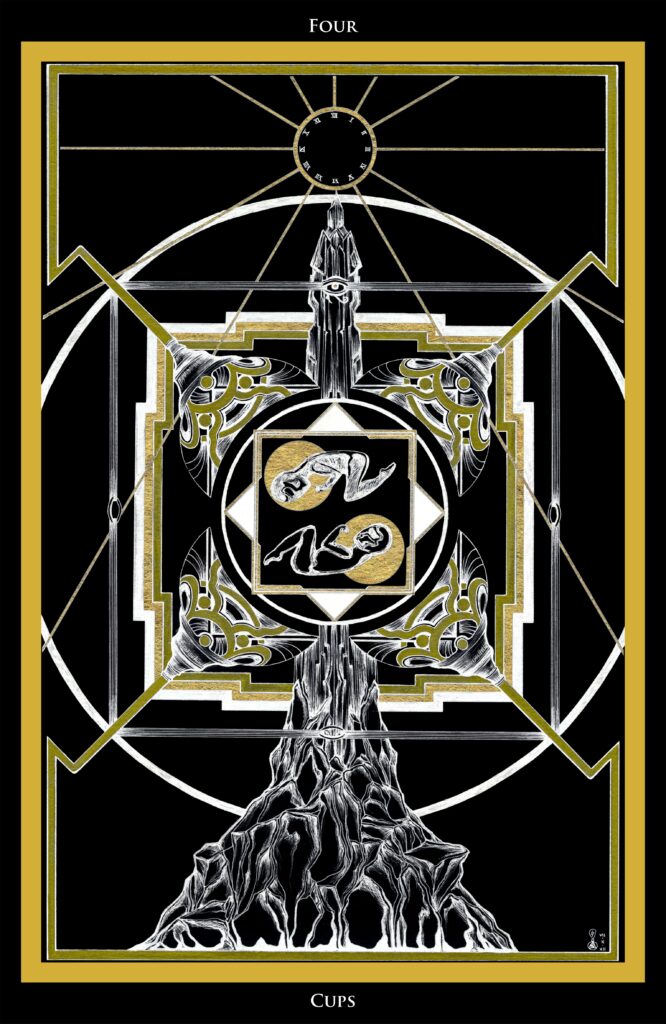 This card shows four cups, isolating a dual square which is isolating two embryos, who are almost ready to be born.
The squares symbolize chesed, the four forces that bind us and the physical world, connected to malkuth.
The two embryos, one white and one black emblematize many things. First the symbol for the sign of cancer (connected to the major arcana card of “The Conqueror”, which strongly influences this card with all of his features. Second the isolation and seclusion in a sphere, where even while being together the unborn children are separated.
In an occult context, the dual child is an obvious symbol which can be explored while resting in this state. Like thoughts, these “children of the mind” cannot yet emerge and are not able to connect to each other. This can mean, that a conclusion which is already forming as an idea, isn’t yet ready to be expressed or can’t be connected in a productive matter. Like in the mothers womb, this can cause a great deal of discomfort and restlessness. Even sickness, sleep problems and disturbances of the body can be an accessory phenomenon. The reason, why it is so difficult to deal with this state of mind is, that in contrast to being alone by choice, this situation is usually forced upon a person. As a result, a great deal of stress may be experienced. Almost no one can live through this phase in an exceptionally positive way, since humans are just not used to this kind of isolation. A third square with four chains reinforces the symbol of captivity.
In the background, we can see a huge tower, build on a stable rocky mountain. Like an axis, one can see the world spins around, while the own situation rests in immobility.
On top of the tower sits a clock without watch hands, representing a seemingly timeless state.
Myths of dark towers, where a person is being held captive may come to mind. Cropped off from the world, the situation seems without resort, which makes dealing with it even harder.
The major arcana card of “The Tower” is strongly connected. But unlike the major arcana card, this tower still sits steady on it’s ground stone. Only time can weaken it’s foundation.
The eye of horus, embedded into a chain within the tower means, that the redeeming thought or action is already forming but not be ready to be released.
A way out of this situation should be obvious but is hard to accept. Watch the world spin, and be patient – there is still something to learn here and nothing to actively do right now. Every movement will cause even more trouble.
Wait for things to be sorted out by themselves – only time will heal your wounds and solve this equation.