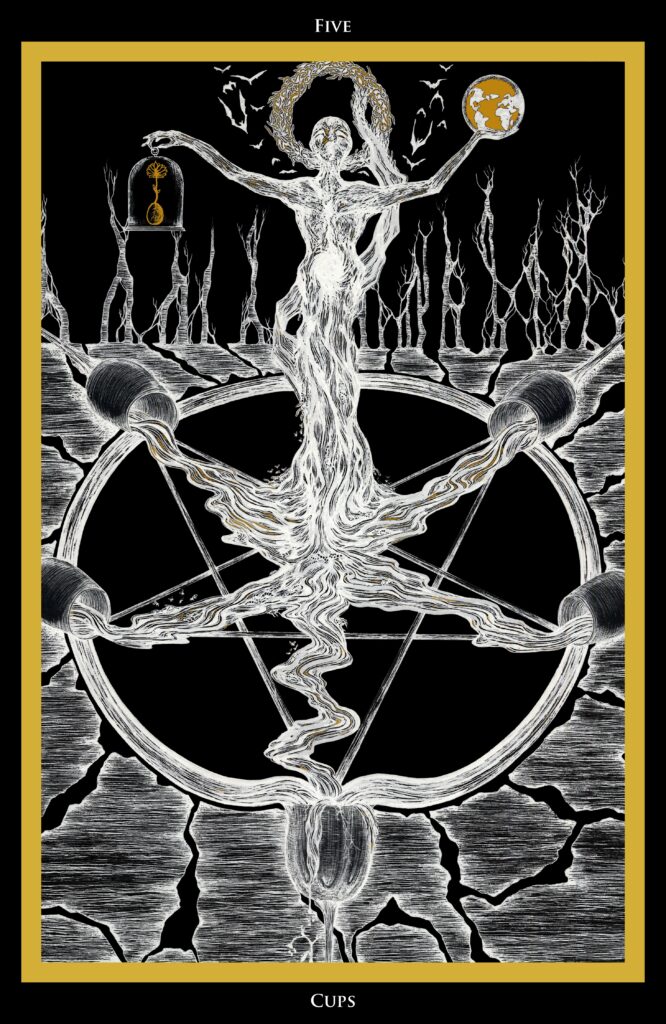 In the lower area of the card you can observe four cups, leaking, one cup is over floating. The four cups represent the fountains running dry and becoming marshy. The fifth over floating cup is symptomatic for an operation, which has been exaggerated and therefor ends in an extreme. Addictions, dependencies or unhealthy relationships usually reach a desperate point, before they lead to destruction or a total downfall. That extreme is symbolized by this fifth shattered cup.
Together the flow which runs out of the cups form an inverted pentagram. Cockroaches, flies and worms are emerging from the unhealthy stream. The whole scenery is situated in a desert, as a hint, that there is no more escape or distraction – one has to face the inner depths now.
In the middle the demon (or core) of the mischief finally takes form and shows it’s true nature. Often the disaster one got into can only be seen at this extreme point of one’s life. Before this devastating situation, the demon often masks himself as being „under control“ or even a good companion – but not anymore! Finally we can observe his true face and get to know it’s nature. The vortex in his stomach is symbolic for a hunger that can never be satisfied. No matter how much you feed to this demon, he will never have had enough – there will never be a moment of satisfaction!
This card seems scary, but it is a real opportunity to change something. Symbolically speaking only in his true form the „demon“ is vulnerable and can be faced and maybe even be defeated. The nimbus does not longer seem holy or sacred but one can see it is composed of worms. A once symbiotic relationship can finally be disclosed as parasitic in nature. In his left hand the personified dependence is proudly holding up a globe. He shows us, that the whole world is dependent and under his control. But look at his other hand. Under a protected dome we can observe a fragile plant emerging from an egg. This young seedling represents the promise that, once the seemingly almighty demon is conquered, one can emerge from this experience as something entirely new and free of the part that died during the fight. Because the world is seen in a different ankle, this card is strongly connected to the major arcana of „XII – The Hanged Man“ and because of the act of falling to „XVI – The Tower“ as well. Connected symbolism can be found in both of these archetypical sceneries.
Don’t be disappointed if the major fight can’t be won at the first try, because the demons seems to be too mighty. To realize the situation is the first step and it is a universal law, that if you back off, regroup, develop a strategy and try again and again, that one day you will succeed!